300+ science and business speeches, from privacy to national security.

THE RIVER OF TIME

"... it was hard for me to tell exactly when the change occurred." — The River of Time 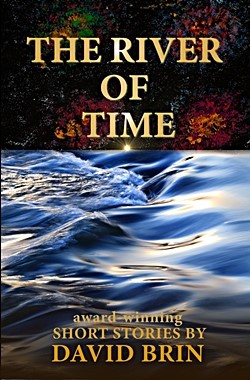 Scroll down to purchase THE RIVER OF TIME.

destiny, among other thrills

The River of Time brings together twelve of David Brin's finest stories, including "The Crystal Spheres"(WINNER: Hugo Award Best SF Short Story 1985), and four new stories published here for the first time. Here are powerful tales of heroism and humanity, playful excursions into realms of fancy, and profound meditations on time, memory, and our place in the universe.

"The Crystal Spheres" offers a fantastic explanation for the Great Silence. Instead of being latecomers, might humanity have come upon the scene too early?

"The Loom of Thessaly" merges classical mythology with impudent modern spirit in a science-fiction classic that speculates on the nature of reality.

"Thor Meets Captain America" offers an alternate history exploring a chilling scenario behind the Holocaust. In this parallel world, the Nazis narrowly avoid defeat in World War II when they are championed by the gods of the Norse Pantheon.

The opening paragraphs of the short story "The River of Time," which gave its name to my first anthology, is up for your pleasure at the UNFIT Magazine site, helping get the new venture launched.

These stories ask: Who guides our fate? And can we ever hope to wrest control for ourselves? Find answers in The River of Time.

Take a look at the YouTube book trailer for The River of Time.

purchase The River of Time

Amazon.com US: paperback and Kindle ebook

Barnes and Noble US: paperback and Nook ebook

PROPAGATION
Lungfish
The River of Time

The River of Time in the world

Brin on the web

Queries about film or media rights to any DAVID BRIN books or stories can be addressed to his film agent:
Vince Gerardis
Created-By Agency
email: rightsqueries@gmail.com
(with cc: to David Brin)

To learn more, visit his books page, or see his "about me" page or detailed biography.

David Brin's science fiction novels have been New York Times Bestsellers, winning multiple Hugo, Nebula and other awards. At least a dozen have been translated into more than twenty languages. They range from bold and prophetic explorations of our near-future to Brin's Uplift series, envisioning galactic issues of sapience and destiny (and star-faring dolphins!). Learn More

Since 2004, David Brin has maintained a blog about science, technology, science fiction, books, and the future — themes his science fiction and nonfiction writings continue to explore. Learn More

Who could've predicted that social media — indeed, all of our online society — would play such an important role in the 21st Century — restoring the voices of advisors and influencers! Lively and intelligent comments spill over onto Brin's social media pages. Learn More

David Brin's Ph.D in Physics from the University of California at San Diego (the lab of nobelist Hannes Alfven) followed a masters in optics and an undergraduate degree in astrophysics from Caltech. Every science show that depicts a comet now portrays the model developed in Brin's PhD research. Learn More

Brin's non-fiction book, The Transparent Society: Will Technology Force Us to Choose Between Freedom and Privacy?, continues to receive acclaim for its accuracy in predicting 21st Century concerns about online security, secrecy, accountability and privacy. Learn More

Brin speaks plausibly and entertainingly about trends in technology and society to audiences willing to confront the challenges that our rambunctious civilization will face in the decades ahead. He also talks about the field of science fiction, especially in relation to his own novels and stories. To date he has presented at more than 200 meetings, conferences, corporate retreats and other gatherings.Learn More

Brin advises corporations and governmental and private defense- and security-related agencies about information-age issues, scientific trends, future social and political trends, and education. Urban Developer Magazine named him one of four World's Best Futurists, and he was appraised as "#1 influencer" in Onalytica's Top 100 report of Artificial Intelligence influencers, brands & publications. Past consultations include Google, Microsoft, Procter & Gamble, and many others. Learn More

other points of departure

All the Ways in the World to Reach David Brin

an ornery, contrary BLOG, and other insightful wormholes!

Do not enter if you want a standard "Party" line! Contrary Brin's incendiary posts on science, sci-fi and politics and its engaged, opinionated community poke at too-rigid orthodoxies, proposing ideas and topics that fascinate — and infuriate. See for yourself, and if you like — subscribe for more.

join me on Amazon

join me on Goodreads

join me on Quora

get on the Brin newsletter! 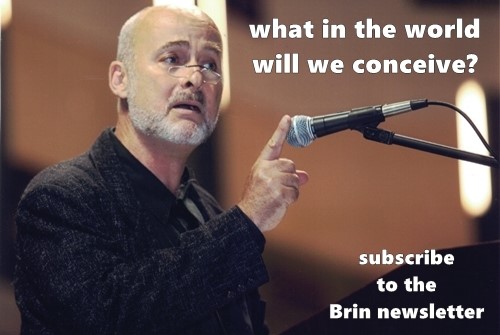 subscribe to David Brin's newsletter and keep up to date on his books, signings and appearances 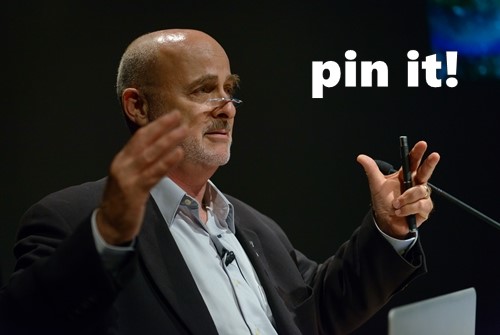 "More than any writer I know, David Brin can take scary, important problems and turn them sideways, revealing wonderful opportunities. This talent shows strongly in Kiln People, a novel which is deep and insightful and often hilarious, all at the same time."

"Brin is a scientist who knows how to tell a story. That's a rare combination."

"Brin's canny sensitivity about the complexities of human nature transcends gender barriers in a novel that is not so much about 'women's issues' as the necessity for change and variability. As in Earth, the author demonstrates his ability to empathize with all his characters. This complex and gripping tale belongs in most libraries."
— Library Journal

"Brin is a fantastic author, who has created a dense, complex futureverse with generally amusing alien races and uplifted Earth races, who amuse even during the most dramatic events. The crux of the story is how does mankind carve out an autonomous existence in the face of alien races with much more advanced technology? Who assists them and what odds do they overcome to succeed?"
— Amazon.com customer review

on science and science fiction

"For we already live in the openness experiment, and have for two hundred years. It is called the Enlightenment — with 'light' both a core word and a key concept in our turn away from 4,000 years of feudalism."
— from The Transparent Society 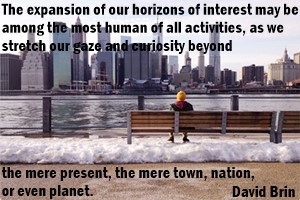